So one of the benefits that come with experience (yes, there are many downsides) is that you get to see various companies from the inside. I have worked in several countries and companies of various sizes, all in the tech sector.

One of my observations over the years, both from the tech companies I have worked for and others that I know well, is how traditional they operate despite making all sorts of claims of adhering to a modern mindset and ways of working. Despite all the corporate slogans and power words, they still organize themselves in a way that I believe is counterproductive to their cause and limits their ability to become a truly agile organization.

How do you best use your super soldiers?

To bring you on board with my thinking, let us start with the most traditional and anachronistic system of all: The military. I witnessed this system first-hand, having served myself. Before you read on, sure, you could argue that one could not organize the army differently. Maybe that is true. I am not in a position to make any claim on that part; however, the military hierarchy is an excellent example of the challenge I would like to address. In the military, title, role and line responsibility, i.e. where you are in the hierarchy, are the same. So your role sets your title and seniority, placing you in the line organization.

Many, if not most, tech/engineering organizations follow this same principle: As you move up in the line organization, your title follows, and so does your role. The problem with this system is that it is rigid and has some real fundamental problems. 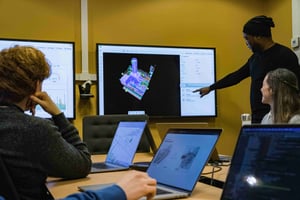 Another real challenge is that it is difficult to change the roles of staff because it entails a change in title and place in the line organization, often perceived as “rank”. Again, you lose flexibility; it forces you to make artificial promotions and demotions when the goal is to change roles. Changing roles should be natural and commonplace in fast-moving tech companies that are truly agile. It should be a quick and low-barrier tool to adapt to the company needs and not involve issues regarding title, compensation and line manager.

In Aize, I believe we have found a better solution, which is better for the company, but I am convinced that it is also fairer and better for all our super soldiers. Our model is to separate and decouple title, role and line org. I would summarize these three categories as follows:

Line org: This is where you have your manager. The most important function of the line org is career development and performance reviews.

Role: This is your day-to-day job. One person can have more than one role, and roles can be temporary. Your assigned role is where the company feels you add the most value.

Title: This reflects your seniority. How much experience you have and possibly also how much contribution you have made in the past. Titles follow the same ladder across all disciplines in the company.

However, there is still a problem to address. It is a paradox that individuals with unique skill sets honed over many years in a company hit a glass ceiling at some point in their careers. They must often transition to a VP management level or similar to advance. Clearly, they add more value to the company by applying their super skills to the company, not as a manager.

To mitigate this, we have adopted principles from the US tech sector and introduced titles Distinguished -  and Fellow followed by a discipline name such as engineer, designer etc. The levels rise to the very top of our compensation grade.

This means, and is hopefully something I will get to witness, that the highest paid individual could be at the bottom of the line org or the hierarchy. I would even make the bold statement and say that most c-level managers are easier to replace than certain individual contributors in many companies.

So by introducing a compensation grade to the “top” for individual contributors, it ensures that when people want to climb the title ladder, they must ask themselves, “Where can I make the most impact? This is my fast track to better visibility and compensation”, fully aligned with what the company needs.

So why am I so proud of this change? The best answer I can give is that it sends a strong signal that we genuinely love our super soldiers and their skill sets. We need their excellence, and we do not want them to be distracted by climbing some hierarchy ladder. We signal that the major part of our workforce, the people building the products, is our most precious resource.

Our model is not unique in any way. Still, given how many companies have been slow to adapt to a modern tech operational model, this post is a reminder to companies that they should scrutinize their policy on line org, title and role.

Want to join our teams?

Christian Møller is Chief Product Officer of Aize. An industry veteran with deep expertise in scaling fast-growing technology companies, Møller has previously worked at Microsoft’s research department on the development of a number of products, as well as on the assessment of new technology and technology companies. Møller has doctorate degrees from Massachusetts Institute of Technology (MIT) Media Laboratory and University of Cambridge in 3D technology, as well as a Master’s degree in optics, electronics and computer engineering from Cambridge.

A Summary of AMLC 2022 - A Six-Week Coding Adventure